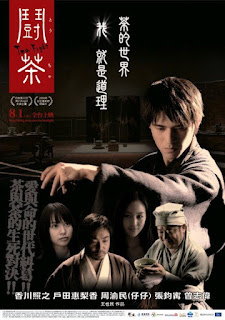 闘茶 or Dou Cha (aka Tea Fight) has become one of my favourite movies over the last few years.  The story is based on a myth which was created for the story line. Two groups created tea, Female Tea and Male Tea. Male groups tea causes aggression while the Female groups tea calms you. I am using Male and Female as those are the group names which came in the subtitles, the languages for the movie are Taiwanese and Japanese (light kansai-ben).
After the two groups are introduced it brings up that a man from Japan is learning from the Female Tea group, to sum it up the two groups fight because of what the student says to a member of the Male Tea group.
A curse is in place which sets the tone for the rest of the movie. Break the curse by beating the Male Tea descendant. The curse itself though was placed on all three members. It causes a lot of turmoil for the characters.
My favourite character is quite minor, Lu Yu pops up every now and then and is event he narrator for the little myth. Very cute overall.  The best part of the movie is at the end where you get to see the predecessor of matcha being made by two characters while another is making it as it has been established to date.
I highly suggest this movie, some of  it seems a little “dopey” but watching how everyone makes tea is worth it.